A beam of muons with aligned spins is directed into a storage ring that has a very precisely known magnetic field. As the beam goes around this storage ring, the muons' spins wobble, or precess. Scientists measure the rate that they precess very precisely. The magnitude of that precession is directly related to the difference of g from 2, or g-2.

The world's best muon g-2 measurement was performed by Brookhaven National Laboratory's experiment E821, completed in 2001. To perform this measurement with sufficient precision, E821 stored a total of 100 billion muons in a large electromagnet and observed their spin precessions. To nearly everyone's astonishment, E821's measurement differed from the Standard Model prediction by greater than 3 standard deviations. Physicists are excited by the possibility that the discrepancy is due to previously unknown particles appearing from and disappearing back into the vacuum. 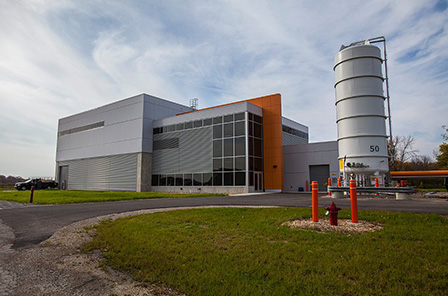 Exterior of MC-1, the home of the g-2 experiment at Fermilab.

The Muon g-2 experiment begins with a beam of protons. About 12 times every second, Fermilab's accelerators smash a bunch of protons, roughly 1012 particles, into a fixed target, creating different types of particles.

Scientists on the Muon g-2 experiment are interested in the emerging pions, which quickly decay into muons, whose spins point in the same direction. Magnets steer the pions and the resulting muons into a triangular-shaped tunnel called the Muon Delivery Ring, which was formerly used as part of Fermilab's Antiproton Source. As the particles travel hundreds of yards around the ring, essentially all of the pions decay into muons. This beam of muons is then transferred into the experiment's precision storage ring, which was also used in the Brookhaven experiment. This 50-foot-diameter electromagnet is housed at the Fermilab Muon Campus.

As the muons orbit around the storage ring at nearly the speed of light, their internal bar magnets will rotate around the magnetic field.

As the muons travel around the ring, they are continually decaying into neutrinos and positrons. The neutrinos fly away undetected, but the positrons, which travel in the same direction that the bar magnet was pointing when the muon decayed, can be measured. The number of high-energy positrons detected as a function of time, along with their energy, provides all the information researchers need to understand how much the muon's internal bar magnet is precessing.

Sensitive detectors installed along the ring will measure the orbits and the precessions of these positrons with greater accuracy than ever before — to 140 parts per billion. The results, which will only be known upon the completion of a several-year run, will be compared to theorists' g-2 prediction. If the experimental result differs from the theoretical prediction, it could be a sign of undiscovered physics beyond the Standard Model. Combining the Muon g-2 results with those from other experiments could help explain, or even point to, new physics the LHC might find. Particle physics theorists at Fermilab and elsewhere are driving a worldwide program in high-powered computational physics to calculate part of the Standard Model contribution to g-2.