A key contribution from Brookhaven Laboratory 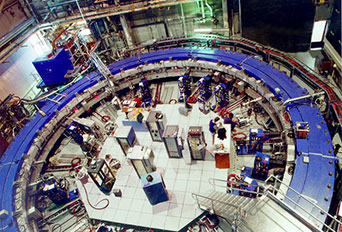 The heart of the Muon g-2 experiment is the 50-foot-diameter muon storage ring, originally used in an earlier experiment at Brookhaven National Laboratory.

Physicists are measuring the muon g-2 very precisely at Fermilab, surpassing the precision of a g-2 measurement previously made at Brookhaven National Laboratory, using a more intense and pure beam of muons. At the heart of the device that stores these beams is a set of three 50-foot-diameter superconducting coils that energize the 700-ton storage ring magnet. Similar to those in a medical MRI machine, the coils are made of titanium-niobium filaments in a copper matrix surrounded by ultra-pure aluminum. Together, they produce a field of 1.45 Tesla, approximately 30,000 times the Earth's magnetic field. The magnet was shimmed to produce a uniform field that was constant to a few parts per million and was measured to better than 1 part in 10 million, the best ever for its size. The experiment reuses Brookhaven's superconducting electromagnet.

The experiment's finely crafted storage ring is sometimes referred to as a "700-ton Swiss watch" because of its high precision and enormous weight. The experiment at Fermilab uses this magnet to store a more intense muon beam than the one used at Brookhaven, producing 20 times more data and improving the precision of the g-2 measurement by a factor of four.

Transporting the g-2 ring 900 miles from Brookhaven to Fermilab was a feat of a different sort. While the iron that makes up the magnet yoke comes apart, the three 50-foot-diameter superconducting coils that energize the magnet do not, and therefore had to travel as a single unit. In order to maintain the superb accuracy of the electromagnet, the 50-foot-diameter circular coil shape had to maintain to within a quarter-inch, and flatness to within a tenth of an inch, during transportation.

In the summer of 2013, the Muon g-2 team successfully transported a 50-foot-wide electromagnet from Long Island to the Chicago suburbs in one piece. The move took 35 days and traversed 3,200 miles over land and sea. Thousands of people followed the move of the ring, and thousands were on hand to greet it upon its arrival at Fermilab.

The move began on June 22, 2013, as the ring was transported across the Brookhaven National Laboratory site, using a specially adapted flatbed truck and a 45-ton metal apparatus keeping the electromagnet as flat as possible. On the morning of June 24, the ring was driven down the William Floyd Parkway on Long Island, and then a massive crane was used to move it from the truck onto a waiting barge.

The barge set to sea on June 25, and spent nearly a month traveling down the east coast, around the tip of Florida, into the Gulf of Mexico and then up the Tennessee-Tombigbee Waterway to the Mississippi, Illinois and Des Plaines rivers. The barge arrived in Lemont, Illinois on July 20, and the ring was moved to the truck again on July 21. And then over three consecutive nights — July 23, 24 and 25 — that truck was used to drive the ring to Fermilab in Batavia, Illinois.

The Muon g-2 electromagnet crossed the threshold into Fermilab property at 4:07 a.m. on July 26. That afternoon, Fermilab held a party to welcome it, and about 3,000 of our neighbors attended. The collaboration is grateful for the support, and for the assistance of all the local, county and state agencies who made this move possible. 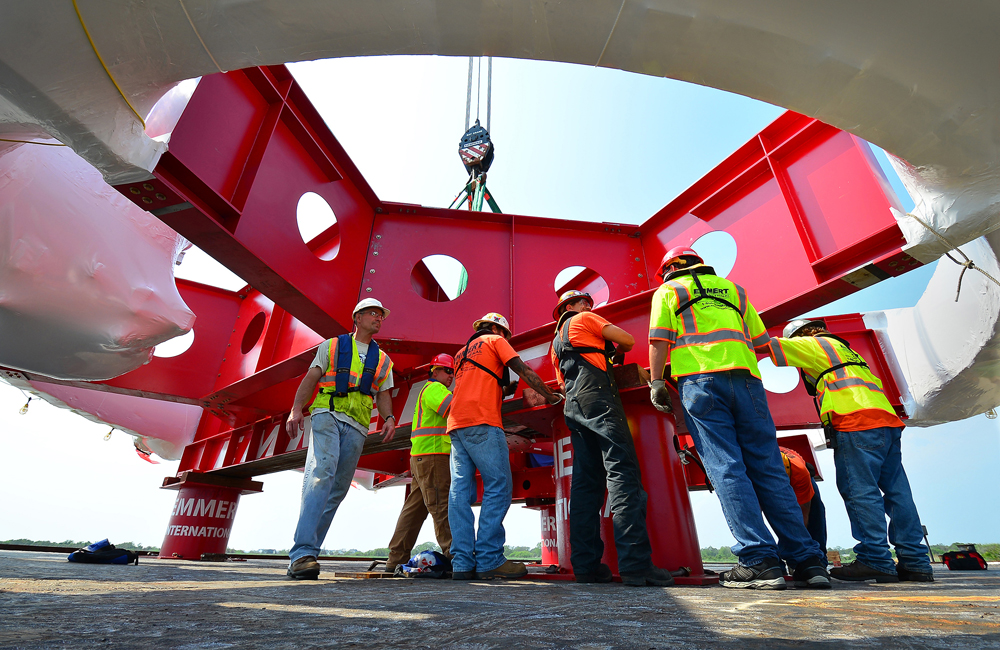 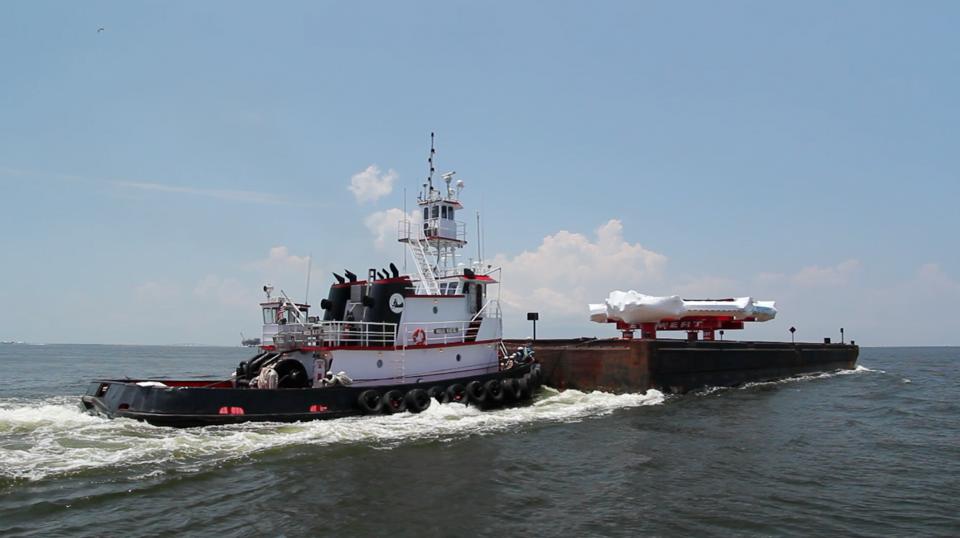 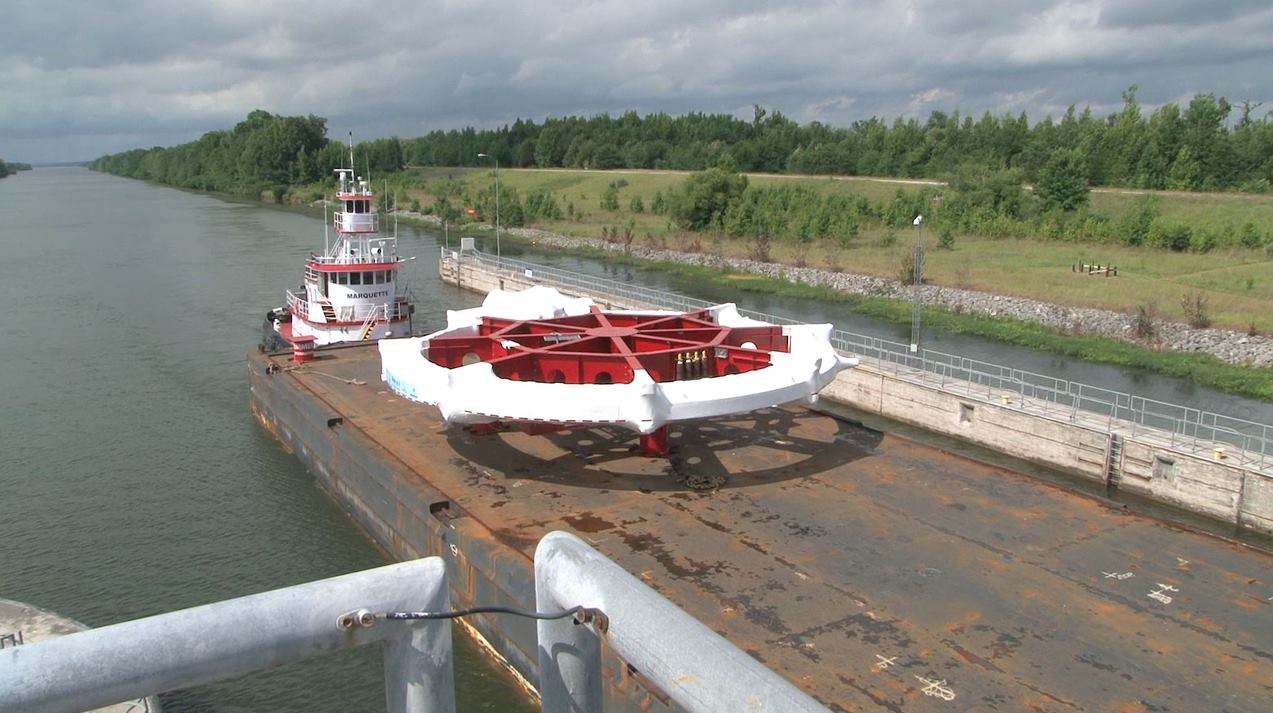 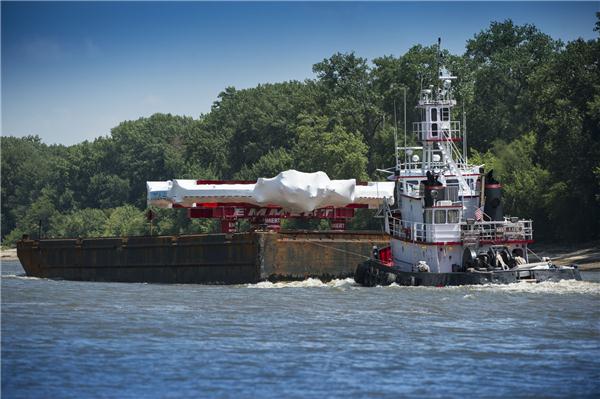 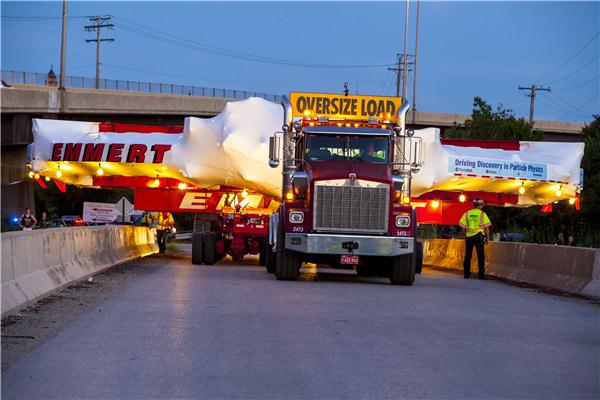 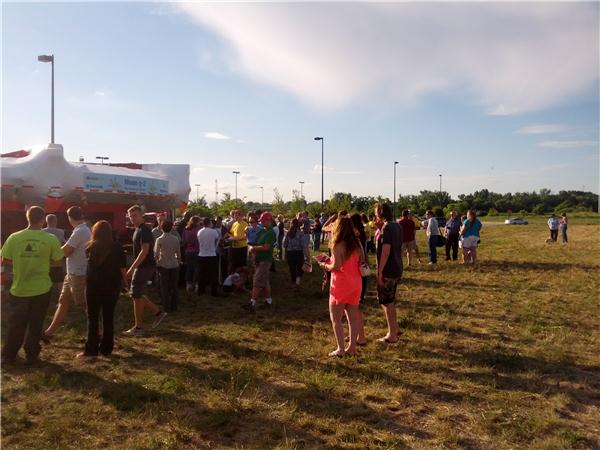 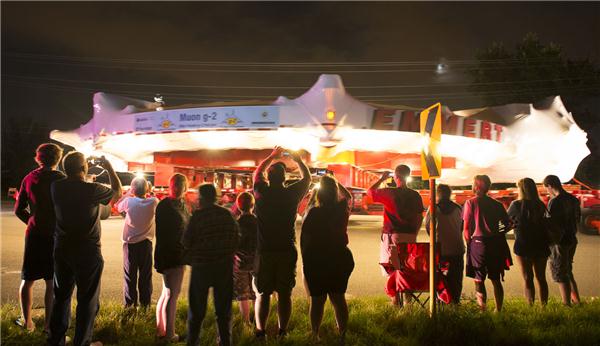 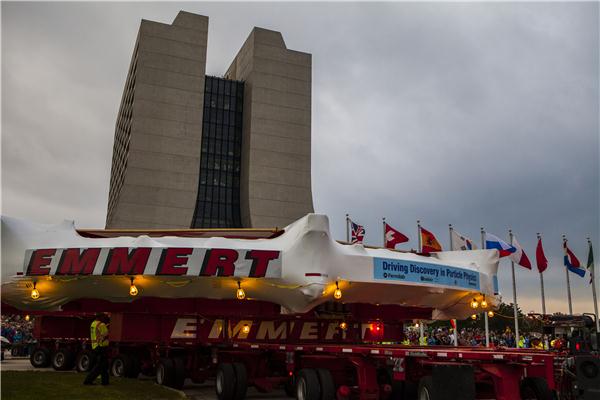 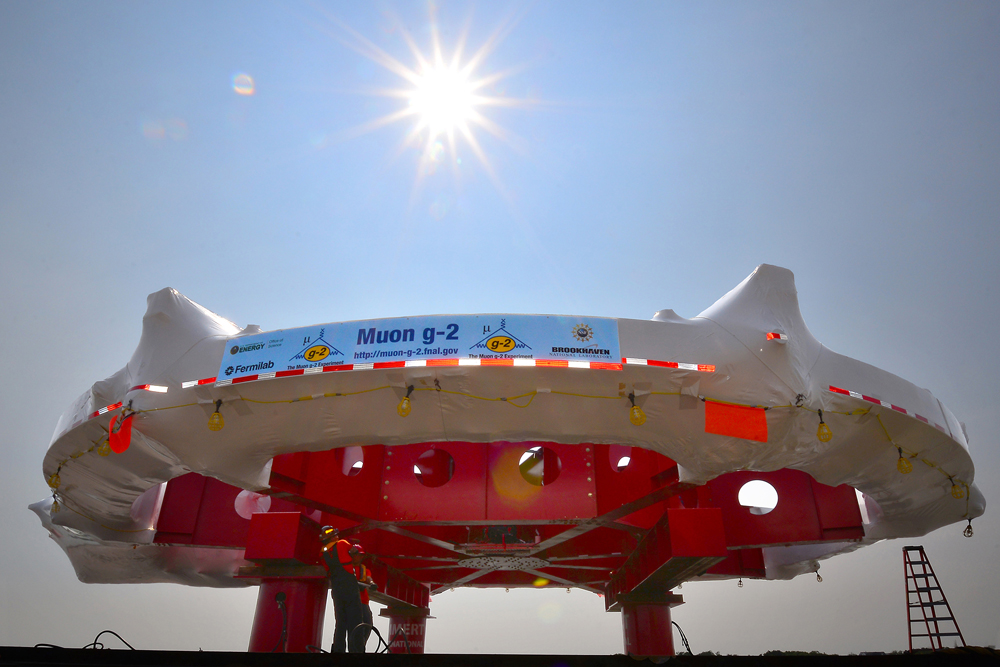 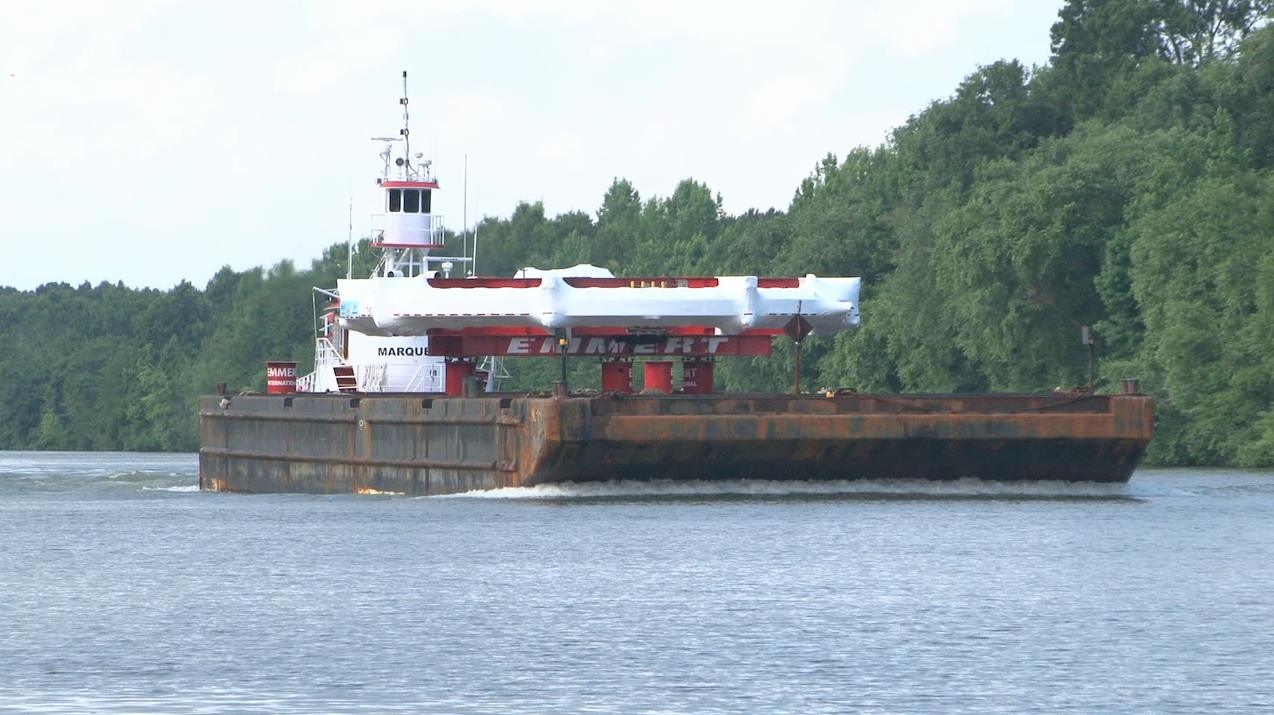 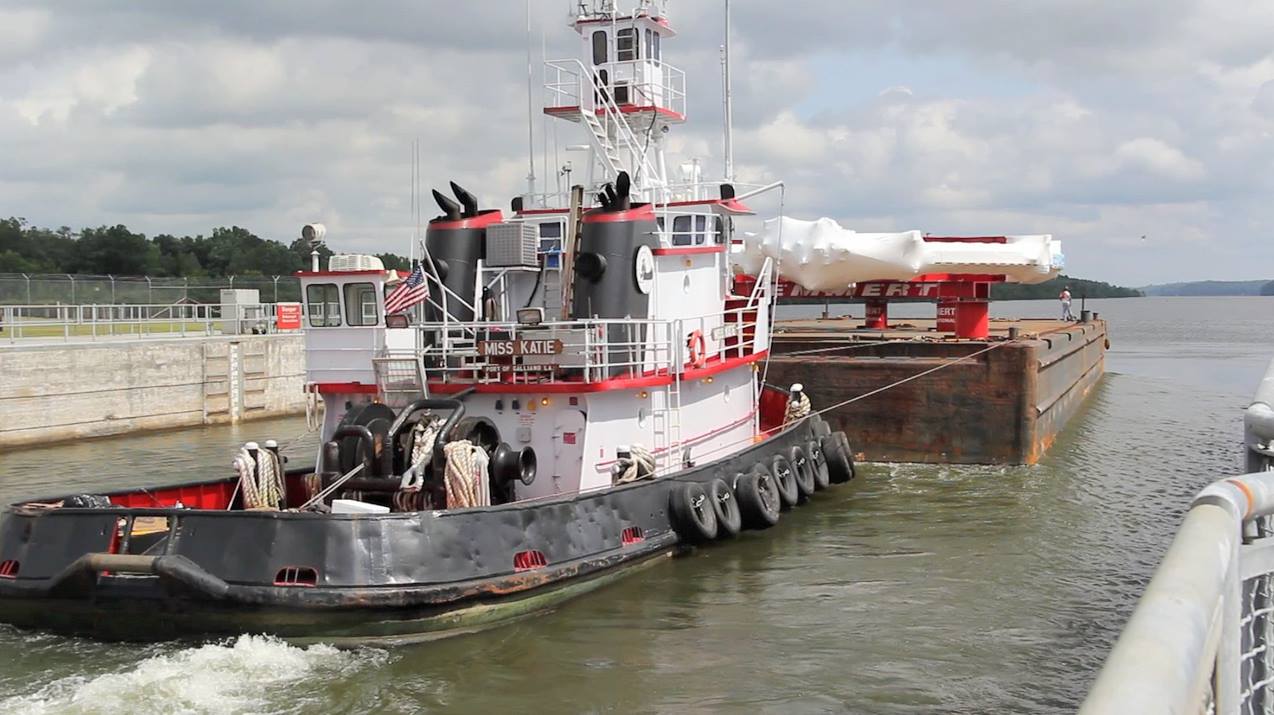 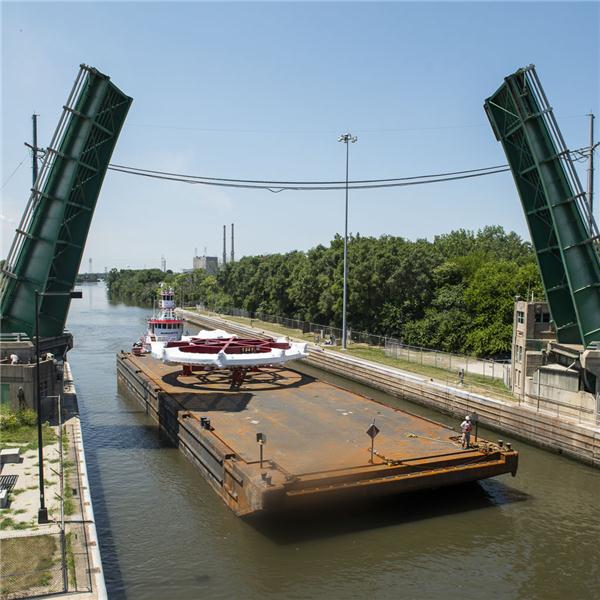 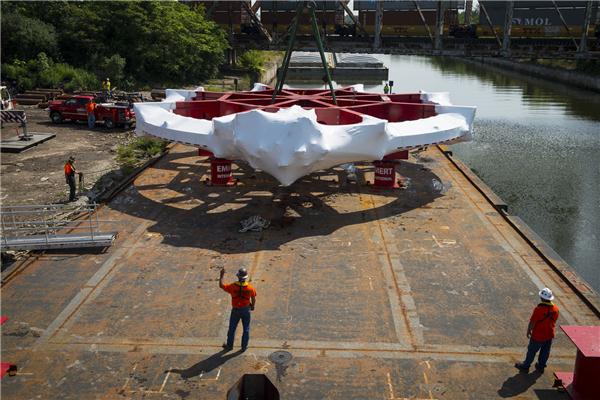 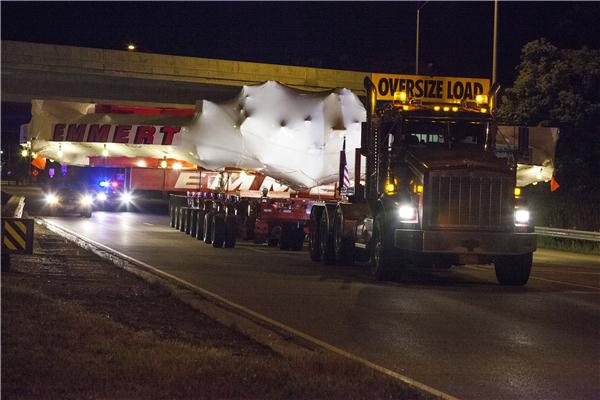 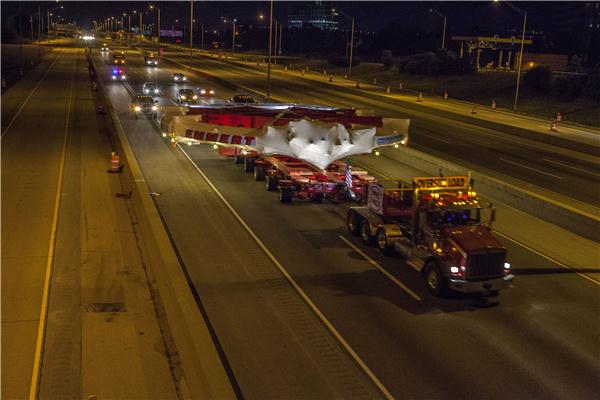 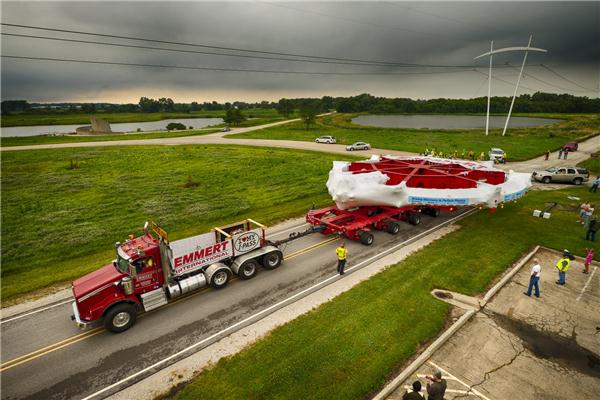 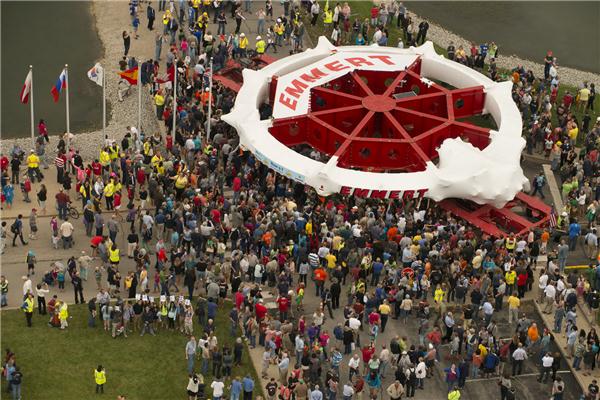 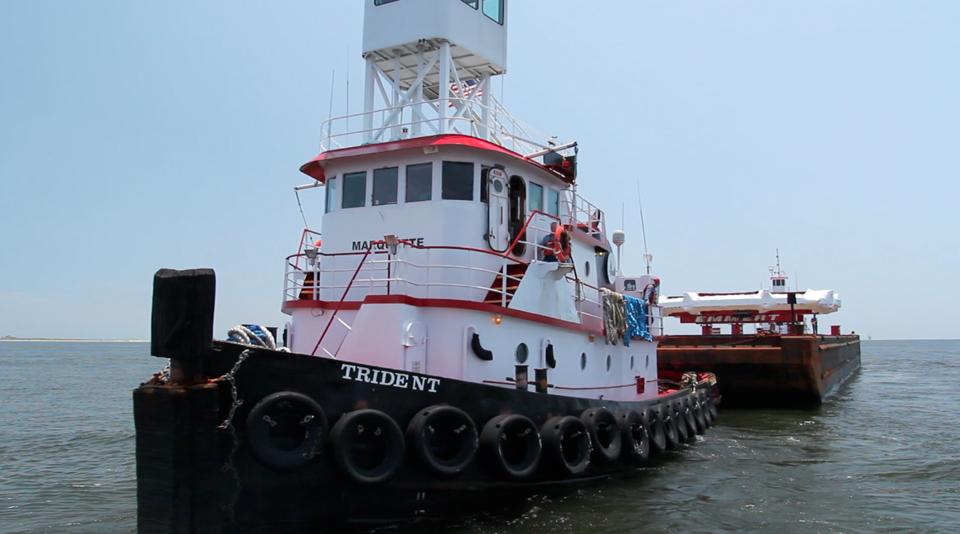 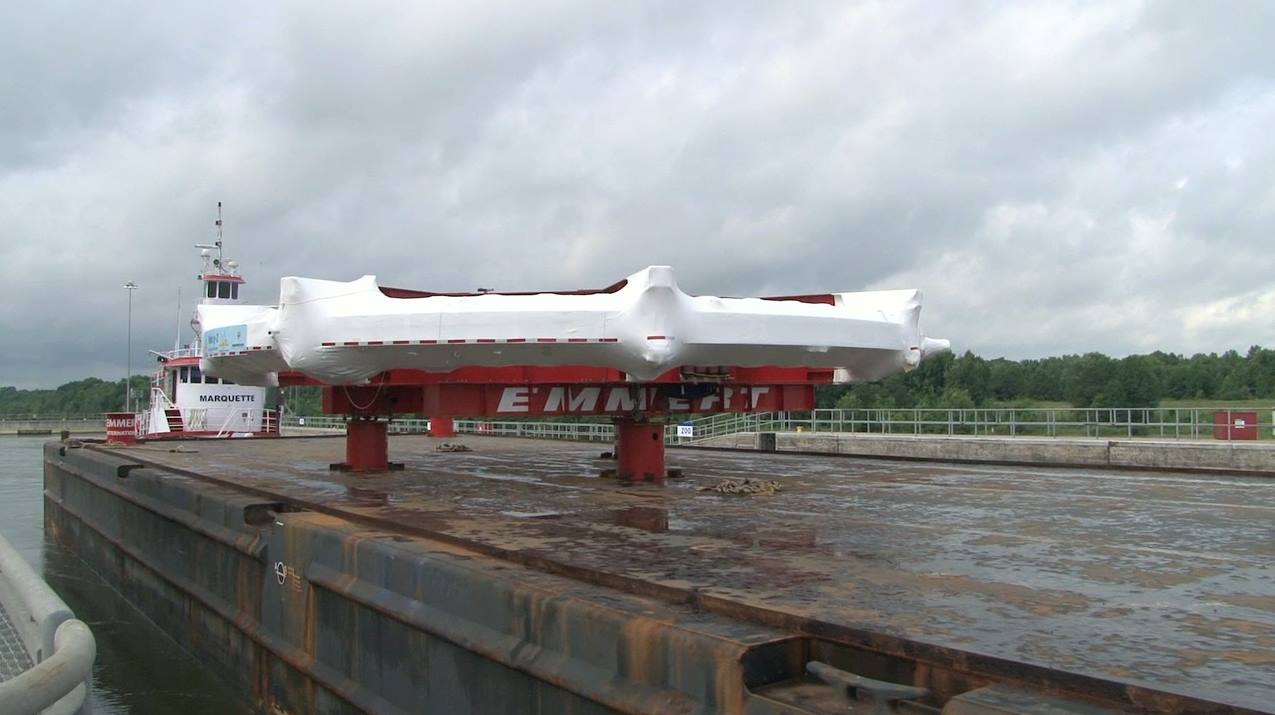 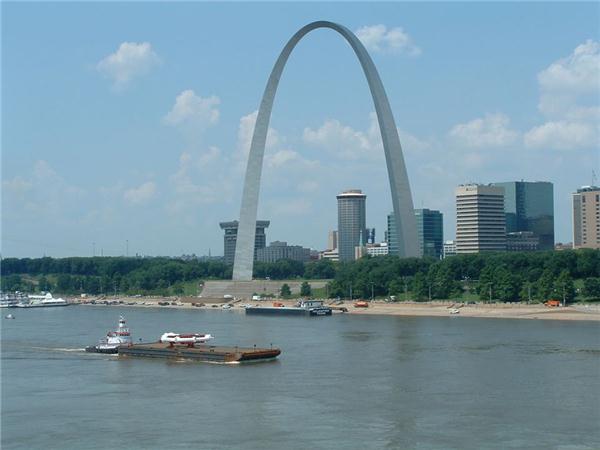 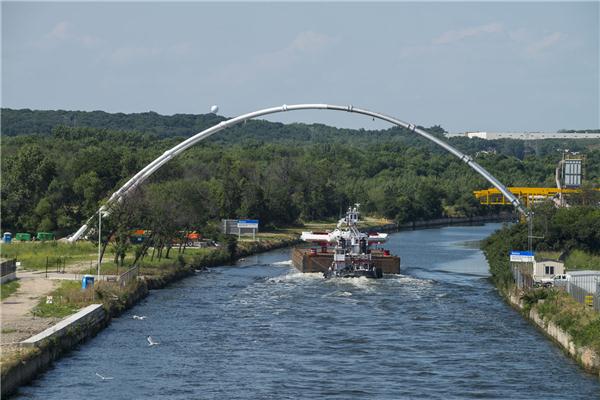 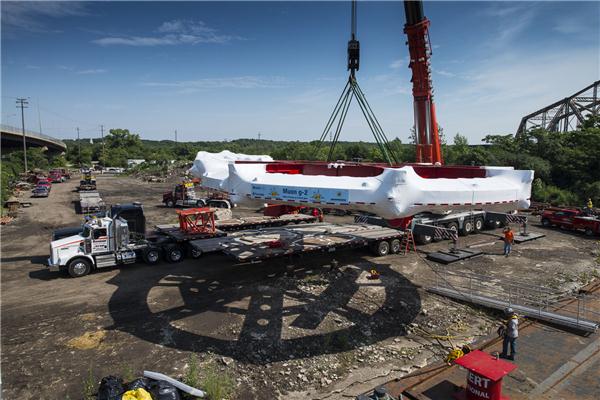 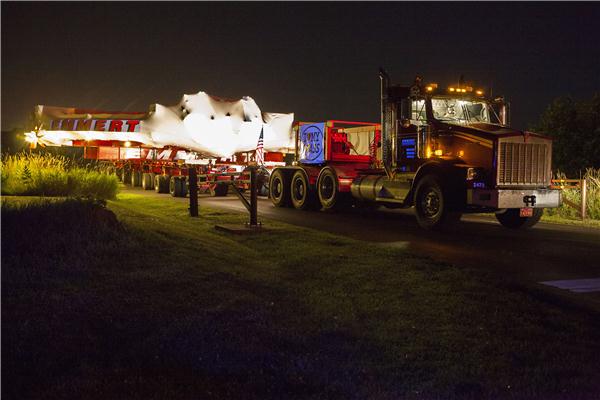 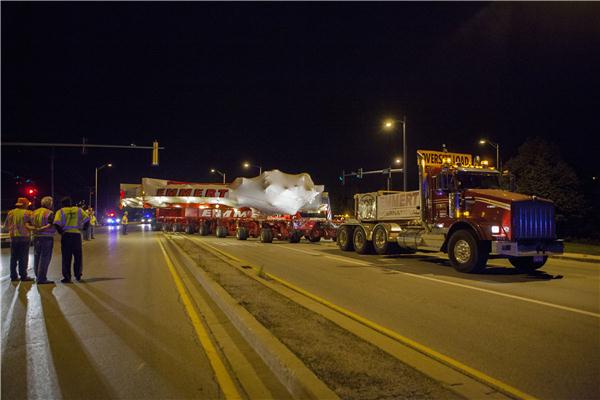 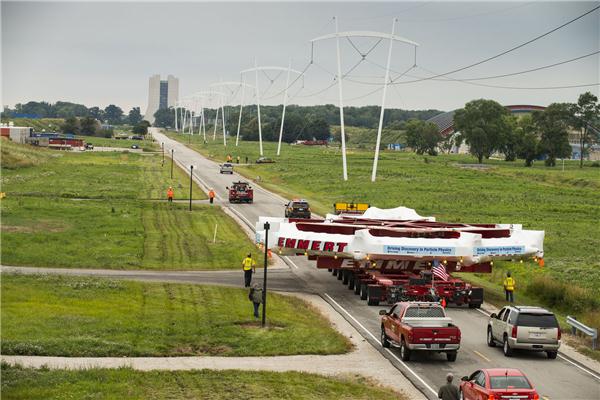 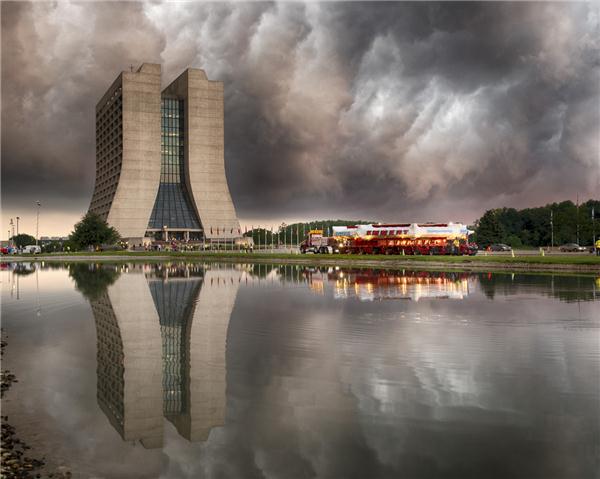