The physics of g-2 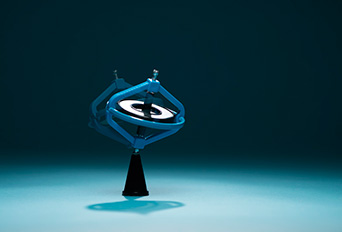 The muon's internal bar magnet can be visualized as a spinning top.

The muon is 207 times heavier than the electron, which makes it particularly sensitive to new types of virtual particles, and Fermilab's accelerators can produce more muons than any other accelerator in the United States. Circulating in a storage ring at close to the speed of light, the muon lives long enough — about 64 microseconds — to allow scientists to make precision measurements of its properties before it decays into an electron and two neutrinos.

A muon has an internal magnet, sort of like a miniature bar magnet. It also has an angular momentum, called spin, much like a spinning top. The strength of the magnet and the rate of the magnet's gyration determine the muon's gyromagnetic ratio "g". The Muon g-2 experiment gets its name from the fact that the gyromagnetic ratio "g" of the muon differs ever so slightly — by about 0.1 percent — from the simple expectation of 2. This anomaly is commonly called the anomalous magnetic moment of the muon.

What can Muon g-2 tell us about matter and space?

A vacuum is never truly empty space. It is filled with a bath of virtual particles that pop in and out of existence and interact with light and other particles. These particles can be massless photons (the quanta of light), lightweight particles such as electrons, or very massive particles such as the W, Z and Higgs bosons. Because these particles are virtual — they emerge only fleetingly from the vacuum — they can be so massive that they cannot be made in the current accelerators at Fermilab or CERN or are difficult to detect there. Thus, scientists can use the vacuum, which knows about all particles discovered and as yet undiscovered, as a tool to study nature's elementary particles without having to create the particles directly.

One ingenious way to use the vacuum as a tool is to study the behavior of muons in a magnetic field. Muons are readily produced at Fermilab in high-energy collisions. Muons also result from high-energy cosmic rays striking our upper atmosphere, so we are constantly being bombarded by muons on Earth's surface.

When placed in a magnetic field, the muon — with its bar-magnet-in-miniature — precesses because of the torque the magnetic field exerts on the muon's spinning magnetic moment. The muon's g-value is altered by particles that appear and disappear within the vacuum. So the muon precession rate is also altered, by the amount g-2.

The Standard Model of particle physics makes a very precise prediction of the muon g-2, accurate to 400 parts per billion. The purpose of the Fermilab Muon g-2 experiment is to make a measurement that is precise to 140 parts per billion. This is equivalent to measuring the length of a football field to a precision of one-tenth the thickness of a human hair. With this increased precision, scientists can compare the experimental g-2 measurement to the Standard Model prediction. The difference between the two values should provide an unambiguous answer to the question, Are there new, as yet unobserved, particles and forces that exist in nature?

Several scenarios are possible. The Fermilab Muon g-2 experiment, which will have four times the precision of the experiment conducted at Brookhaven National Laboratory, could confirm at a higher statistical significance the Brookhaven discrepancy with the Standard Model. This would be a clear sign for physics beyond the standard model, such as supersymmetry or the postulated "dark photon" that could be part of the dark matter in the universe, ushering in a new era of particle physics. Conversely, if the g-2 measurement confirms the agreement between measurement and Standard Model theory, then this would place very strong limits on the existence of many beyond-the-Standard Model theories. Either way, the Fermilab Muon g-2 experiment will drive our physics understanding forward with important implications for future experiments.